Fa'a tumoa or Fa'a moa fai / Banana Pod
This symbol is used in two ways, the closed or unbloomed banana pod or the blooming pod with its petals open.

Fa'a 'aveau / Starfish
This symbol has sometimes been mistaken as the sun.

Fa'a lau ulu / Breadfruit Leaf
The whole leaf pattern may be used or just the edge.

Fa'a atualoa / Centipede
This symbol had also had been phased out over time and is now being reintroduced.

Fa'a sigago / Male Pandanus Bloom
When the pandanus blooms, the flower hangs down and the narrow petals end in a cluster of sharp points.

Fa'a 'ali'ao / Trochus Shell
The shell is triangular in shape and can be used in many different formations such as a diamond for example.

Fa'a lau paogo / Pandanus Leaf
Paogo is Samoan for a particular type of pandanus tree, however, is also used to describe the pandanus tree in general.

Fa'a 'anufe / Worm
This symbol is found in earlier works of Siapo, however, it is seldom used and has almost become extinct. 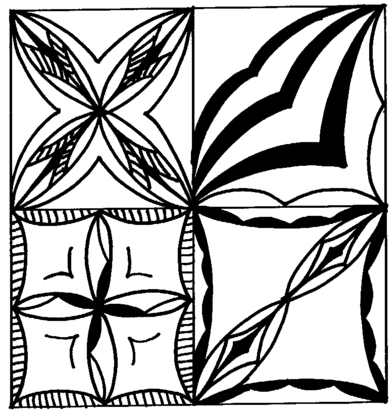 Fa'a masina / Rolled Pandanus Leaves
This symbol is sometimes mistaken for the moon.